I have this vague memory of a family friend or a relative visiting my parents when I was very young, and we had to sit and look at their vacation photographs on a slide projector. It was boring. Loads of bad, nearly identical photographs to wade through, and my parents, being polite folks that they were, insisted that I sit there quietly instead of wandering off to read a book while using the family dog as my pillow.

For a four-year-old budding bookworm, that was hell.

For you young ‘uns, this is a slide projector, which was used to torture the viewers with boring vacation pictures and baby pictures. 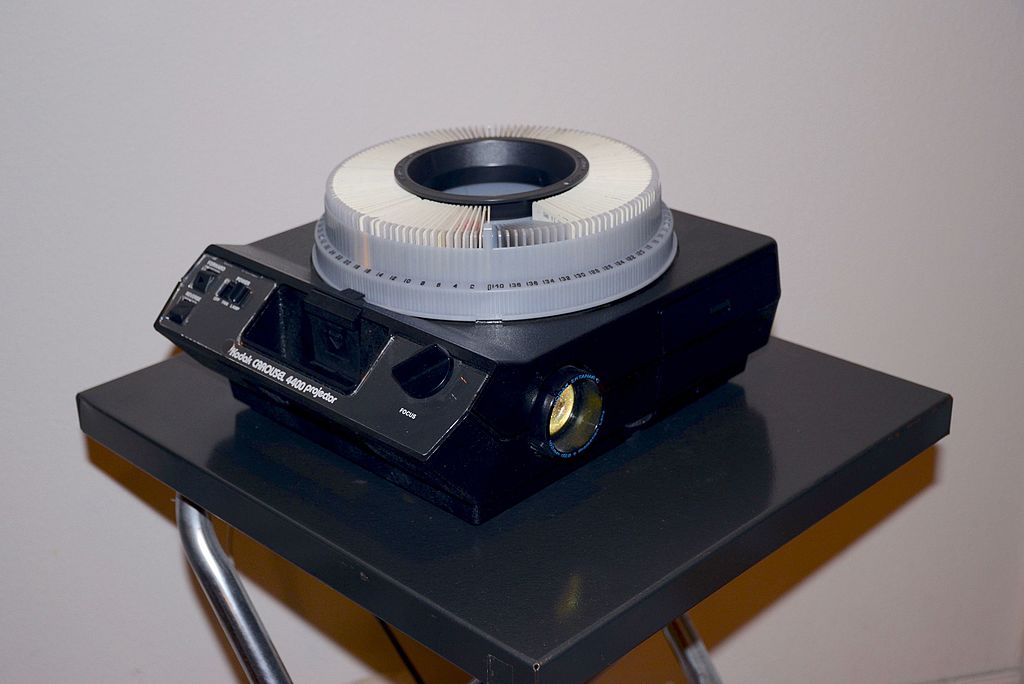 Each slide — a rectangular cardboard with a rectangle cutout, in which a single frame of negative was inserted — drops down into the projector, and the lens project it onto a large screen. Which is how it got its name, slide projector. If you didn’t have a fancy home movie screen, you made do with a blank wall or plain white sheets.

I recall being far more interested in figuring out how the projector worked than the photographs, which says something about the quality of these images.

As the 80s progressed, this piece of technology faded away. Or so we children of the 70s and 80s thought. Fast forward some 30 years, and vacation/pets/kids slides are baaaaack.

People are often so attached to the subject in their photographs that they have a hard time discarding any one image. They end up having dozens upon dozens of nearly identical images. To them, each one conveys a slightly different look or mood. But to others? They’re just boring photographs.

I loved my dog. He was the best dog ever. Funny. Full of personality and little quirks and idiosyncrasies. I knew him so well I could look at him and know what he wanted at a particular moment. Toy/play, belly rubs, pottying, food, or naps. I could read his expressions and know when he was thinking very very hard. Gears churning away in his little noggin as his eyebrows rose or fell as he contemplated a puzzle. I took hundreds, if not thousands of pictures of him. Many with very minor difference in between each.

Because I loved him, I often had a hard time picking just one to show.

It’s really tough to pick just one, when they’re so cute, expressive and darling. Look at that face! Who wouldn’t love him?

The logical side of me knows that most people aren’t super interested in being deluged with nearly-identical images of a subject they have no investment in. I don’t particularly enjoy seeing someone’s bouncing baby boy try a slice of lemon the first time in ultra-slo-mo. But to a first-time parent of that child, it’s the funniest, most adorable thing ever.

It’s tough to pick just one!

These are my rules when it comes to my photographs (for which I reserve the right to amend later):

I’ll have more posts on curating and selecting photographs in the future. After 20-odd years, I’ve gotten pretty ruthless at eliminating photographs.