Before and After: Red Rock Climbers

Sometimes it’s tough to know how to edit an image. IMO, as long as it’s not totally wacky and over the top, you should feel free to play with an edit until it feels right to you.

My workflow isn’t the most efficient, but as a hobbyist, I have the luxury of taking my time and trying out different looks until I’m happy with it.

Normally I edit my raw files in RawTherapee, an open-source alternative for Lightroom, and save for web. But this time I decided to edit in Photoshop.

In Adobe Camera Raw (ACR), I made a few minor tweaks, improving the color balance, contrast, and minimizing the chromatic aberrations.

Any edits you make to a RAW file in ACR doesn’t affect the RAW file itself. The software creates a separate file containing these changes. It’s like a gift box, in a way: the wrapping paper changes the appearance of the box, but the original box remains unchanged. If you so desired, you can revert to the original appearance, or make a new “wrapping paper”.

Next I switched over to Photoshop.

Next Stage: The Fun Editing

When I edit in Photoshop, I always fix the little problems first, so that they don’t distract me. Here, I thought I had a bunch of dust spots, which can’t be corrected in RawTherapee (I think you can in Lightroom, though). After zooming in, I realized they were in fact birds. Because they were so distant and small, they didn’t add to the overall image.

Zapping them with the heal tool took care of the pesky not-dust specks in quick order.

(Aka my train of thought as I postprocess this)

"You can't fall if you don't climb. But there's no joy in living your whole life on the ground." – Unknown . . I miss climbing. I have a hard time finding partners because of communication barriers, and truly appreciate having had a great partner who introduced me to rock climbing (hi @kurry.swig!) in exchange for learning some ASL. That was a great experience, and I remember it fondly. If/when I find another partner who can communicate in ASL, I'll definitely give rock climbing another go. Though the idea of having to start over at 5.7 isn't thrilling, haha. . . . . . #rockclimbingwomen #rockclimbers #climbingrocks #gardenofgods #coloradolive #colorado_photographers

This picture, already posted on my Instagram, was shot a few minutes prior to the picture featured in this article. I opted for a very warm look for that one, and I wanted a different look for this other one.

Although I took these photographs relatively early in the day — around 8:30 AM – the light was already strong, which is typical for Colorado. The strong contrast would work well in black and white, I decided. Possibly as a silhouette.

I fired up the Nik Collection’s Silver Efex 2 plugin.

Side note: The Nik Collection was originally developed and owned by Nils Kokemohr, and this software was available for purchase for about $500. Google purchased the software and lowered the price to $150. The speculation is Google wanted to cannibalize the software to create its own set of filters for its photo-editing apps. In 2017, they decided to discontinue developing the software and made it free to download (at which time I grabbed a copy).

Later that year, DxO purchased the software from Google, and resumed development and support. At this time of writing, the Nik Collection is available for purchase for $50, though you can try it out for free for 30 days.

There’s no right or wrong way in choosing how to edit an image to achieve its final looks (Eg using a plugin versus desaturating). However, it’s very easy to “overcook” and make an image look very artificial and weird. In general, my rule of thumb is, if I ever wonder, “is this edit too much?” It probably is. That’s my cue to scale an edit back down anywhere between 50% and 80%.

Anyway! Now that I have a general idea of what direction I want this image to go in, I can play with different settings. Because I thought a silhouette look might work well, I found a high-contrast preset in Silver Efex.

When editing photographs, I like to let it gel a bit. Sometimes I’ll walk away from the computer for a few minutes. Then when I get back to it, my eyes are refreshed, and I can better assess the possible postprocessing edit.

Looking at this, I felt that there was too much negative space for this to work well. Maybe if this image had been composed differently, or if the climbers were in different spots on their ascent. For a dramatic edit, this wasn’t a dynamic scene. It didn’t feel well balanced.

I’ve now revised my plan: not quite a silhouette, keeping some detail in the rock, but still a strong contrast.

The Silver Efex “016 Full Dynamic” seems to fit what I’m envisioning. Few tweaks to the sliders to customize the image further, and a subtle blue split toning, and we have this.

Ok, that’s pretty close to what I was aiming for. I’m fairly happy with it.

That vertical streak of lighter rock is the result of water funneling down a crevice and sun bleaching it lighter. It bugs me because it looks like a fake sun flare, but because it’s a natural and permanent feature, I’ll leave it as is.

And there you go. 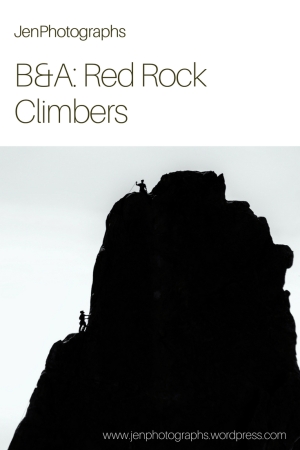