Summer will be officially here in about two weeks. AAA estimates that some 46 million Americans will travel somewhere for the Fourth of July.

That’s a lot of people on the road!

Whether you’re taking a break on a week-long road trip or a quick jaunt into your nearby convenience store, it’s tempting to leave your camera in the car. Gathering up 5-10 lbs of camera gear and accessories and finding a comfortable way to carry it can be a hassle. Doubly so if you’re also carrying a big tote purse, or chasing after young, rambunctious children.

You think, “I’ll be just a few minutes. I can see the car through the window. It’ll be okay.”

The thing is, though, you’re not going to keep your eyes constantly on your car, and exit the store in time to chase a thief off. It takes all of 10 seconds to smash a window, and go rooting for goods. In a split instant, hundreds or thousands of dollars in gear is gone. 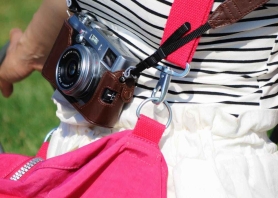 Every single time you step away from your car, take your camera gear. This might seem like common sense, but this has happened too many times. You think: “just this once…”and justify it in your mind that it’ll be okay. Maybe you’ve already done it a few times in the past with no problem.

All it takes is 10 seconds.

“I left my camera in the car overnight while I was at a hotel. If you see XYZ camera on Craigslist, it might be mine.”

“I left my camera in my car in my own driveway. What the hell?”

“I left the camera in my car while I ran inside for groceries. I put it under my seat, and no one could see it. It still got stolen. The police can’t do much. FML.”

The people who break into your car? They’re usually experienced. They know where people hide their valuables. Under the seat. In the glovebox. In the trunk of the car. There are limited places to hide your valuables, after all. And it takes only seconds to check the usual hiding places.

They don’t even necessarily know for certain that you have valuables. They’re gambling that you might.

A few years ago I lived in Washington, D.C., in a safe area with a well-lit parking lot. Someone – likely a drug addict, the police later said – broke into my little Honda Civic, which I kept fairly clean, and proceeded to rifle through the glove box. When they found nothing of value, they stole my car’s gear shift knob. It wasn’t valuable; it was an brushed aluminum knob that cost $25.

For those of you who’ve never driven a manual shift car, this is what a gear shift looks like.

I was both pissed and amused, and I didn’t replace the knob for a few weeks. I even took it to a restaurant with valet parking just to mess with the valet drivers. It was so worth the $10 to see their faces when they got into my car.

So did mine. It didn’t even go off.

Not convinced yet? Here’s another reason.

The Heat can break your camera

In the camera manual for Pentax k5 dSLR, it states: “the temperature range for camera use is -10°C to 40°C (14°F to 104°F).” Other brands and models have similar operating temperature ranges.

In summers, a car sitting out in the sun can get ridiculously hot.

How hot can a car get?

What can this temperature do to your camera?

According to the k5 manual, it can cause the LCD monitor to go black, and the damage can sometimes be permanent.  It can also melt the grease in your lens’ aperture mechanism and get oil on the aperture blades. This is bad because it’ll later re-solidify and cause your blades to get stuck.

Tips for traveling with a camera

I subscribe to the KISS axiom: keep it simple, stupid. Prioritize. If you’re on a road trip, for example, and you have two bags of camera gear, take the expensive stuff that you can’t live without or replace easily.

On road trips, this is what my “take” bag looks like:

I’m not going to tiptoe around it: bathroom breaks are hella awkward, especially for us ladies. If the bathroom is empty, use the hook on the back of your stall’s door. If it’s busy, or there are no hooks, don’t put the camera bag on the floor. Not only is it gross…

…you’re asking for someone to swipe it from underneath the door.

Depending on your comfort level, and how much room you have, you might need to use the toilet while wearing or holding the camera bag.

Yep, hella awkward. You can do it, though! Which do you prefer: a few minutes of discomfort and weirdness or a loss of hundreds or thousands of dollars due to a car break in?

Someone stole your camera. What do now?

Let’s say you didn’t find this article till it was too late. Hopefully you already reported the theft to the local police, and have gotten a copy of the incident report.

The first thing you need to do is dig up your camera’s serial numbers. It should be on the original boxes or your sales invoice. If you no longer have that, head over to this site:

And upload a picture to it. Your camera stores the serial numbers in the exif data of all the photographs taken with that camera. Presto! Serial numbers.

If the police don’t already have this information, be sure to update them so that they can keep an eye out.

This site will also look online for other photographs taken with the same camera. If your thief is stupid enough to take more pictures with your stolen camera and upload it to internet somewhere, police might be able to track him down.

In some states, pawn shops are required to report to their police about items that were pawned. But not all states require it. And even in states that legally mandates it, not all pawn shops are scrupulous. Those are the exception, not the rule, though.

Start visiting your local pawn shops on a weekly basis. If they seem to sell a lot of merchandise, you may want to go more frequently.

Criminals are not using pawnshops as much because they know these stores frequently work with the police to recover stolen items.

For example, if your camera was stolen in Seattle, set the alert to search Bremerton, Tacoma, and Kent.

That’s about all you can do. Sometimes you’ll get lucky and your camera gear will turn up in one of those places. More often than not, though, they’ll be sold to a fence or to a “friend” for quick cash.

A Lofty Introduction to Drone Photography

7 Reasons You Need a Tripod