Every so often, magazines run these Cosmo-quality articles advising readers on what to look for in their photographers and lists questions to ask. Among some of the ridiculous, unrealistic questions like what cameras they use (would you ask your doctor what brand scalpels they use?), they often suggest asking for RAW files. Some go as far as to say that you should reject a photographer if they balk at providing RAW files.

So, the blushing brides, caring moms, and eager high school students, believing that these magazines wouldn’t ever spew bad advice, go out to find a photographer. And inevitably they post on social media, furious.

“Why won’t photographers give me the RAW images? I’m paying for it, after all!”

First, let’s look at what RAW images are.

A Lack of Trust

When you go to a restaurant and order the Chef’s Special, you don’t follow that up with “bring all the ingredients to me, I’ll cook it myself”

When a client asks for RAW files, what it sounds like they’re saying is: “I don’t trust you.” “You don’t know what you’re doing.” “I don’t think you can follow through and deliver your best work.”

Whether intentional or not, this is what a photographer hears. Photographers are humans. They’ve have worked hard to hone their craft. It’s more than just pushing that shutter button.

Pulling Back the Curtain

Imagine going to Disney World. You have a great day exploring the cute little shops, the rides, and meeting all the Disney characters. Pluto comes up to you, shakes your hand, and acts excited to meet you. After a minute, he glances at a clock and pops his head off, revealing a sweaty, greasy kid. The kid squeaks, “Time for my break!” and saunters off.

Someone takes you by the elbow and says, “Come with me.” They lead you into a dingy, dirty tunnel. In one of the side rooms you pass, Cinderella and Snow White are sharing a cigarette and bitching about that idiot kid who kept grabbing their butt.

That’s not the Disney experience you wanted, right? No. You want The Disney Magic, fairy dust and all.

If a photographer complies with their client’s request for RAW images, it’s the equivalent of removing the magic. It’s a little too real. Pictures will seem blah and boring. There’s no pop. Some will be a little soft. Underexposed. Or overexposed.

It’ll be tough to see the potential in these images.

And worse. It’ll change your opinion and make you question your photographer’s skills.  This photographer on whom you spent serious bucks.

Most established, experienced photographers will develop a certain style or look in their post-processing. It becomes so consistent that people familiar with that photographer’s overall work can point to a random picture and go, “Hey, isn’t that Soandso’s photograph?”

Side note: I, not a working pro photographer, have avoided nailing a specific look in my work. I’m enjoying exploring different techniques right now.

In the music industry, a band would never release an album of raw sound files that hadn’t been digitally mixed or remastered. They want people to hear only their very best product.

It’s the same thing for photographers. Good photographers don’t want anyone to see unedited, raw files. They want people to see only the best reflection of their works.

The instant a photographer presses the shutter and produces an image, they own the copyright to the image. It’s the law.

When a photographer hands over the RAW files to a client, it’s harder for them to prove they own the copyrights.

Here’s a shaky analogy — bear with me, I’m still refining it. Say you go on a long trip and ask a friend to house-sit.

Your friend turns out to be a not-so-good friend, and proceeds to put your house up for sale. As far as the realtors and househunters are concerned, this friend is the owner, and they don’t question it. The house sells. The friend produces a deed, pockets the money, and skips town.

You arrive home to find that your key doesn’t work and the new homeowners are happily eating dinner in your kitchen. Police won’t act because this is a “civil matter”, and their deed seems to confirm that the new residents are the owners. Even though you’re the rightful owner, you can’t evict these people because they have the paperwork.

Translation: the photographer hands RAW images over to the client. The client turns around and sells the images to a magazine. Pockets all the money. The photographer doesn’t get to see a penny of it because for all intents and purposes, it appears to the magazine the client is the original owner because he had the RAW files.

It has happened. Sucks, huh?

That’s a part of why photographers are protective of the RAW images.

Does this mean I can never ever get RAW files?

Never say never. Most photographers know and understand that some clients have a legitimate need for these RAW files. Maybe the client needs them for business purposes. Or maybe the client wants to have copies in case the photographer goes out of business.

And like nearly everything in life, it’s open to negotiations.

Do be prepared: the photographer may request a higher compensation fee in exchange for delivering the RAW files. And they might require some additional legal paperwork to be signed. 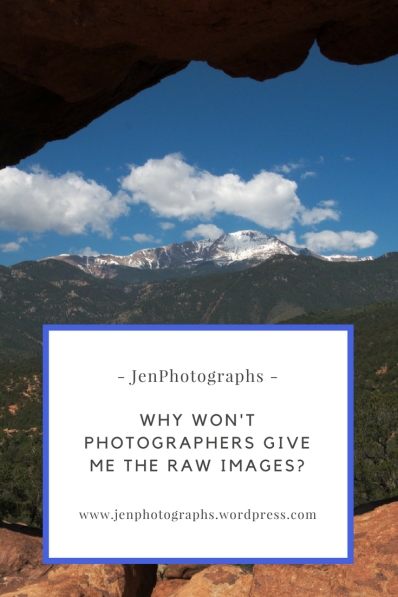 Flying with your Camera Gear